Lunch is a big part of my day.
It's an opportunity to get out of the office, stretch my legs, grab something delicious to eat, and practice my abstinence while avoiding unhealthy stuff in favor of trying to get thinner, sexier and less explosive when it comes to my liver.

Hummus is a great option, since it's one of my favorite foods, and when it's actually made fresh - it's not as bad for you. Sure, hummus, tahini and olive oil are fats, but they're the good kind, and when you eat with a fork instead of a pita - you win!

Below is today's lunch, from a place that specializes in falafel but actually serves a decent hummus.

This post actually dates back quite a while ago, at least a year and a half, which is the time passed since I've decided to go vegetarian/vegan.

Due to the above, it'll be useless to describe prices, service and ambiance that could have easily change in said period.
The dishes mentioned below however, they did not change, not at all.

Take a look, and if you go and try this sandwich - tell me all about it. 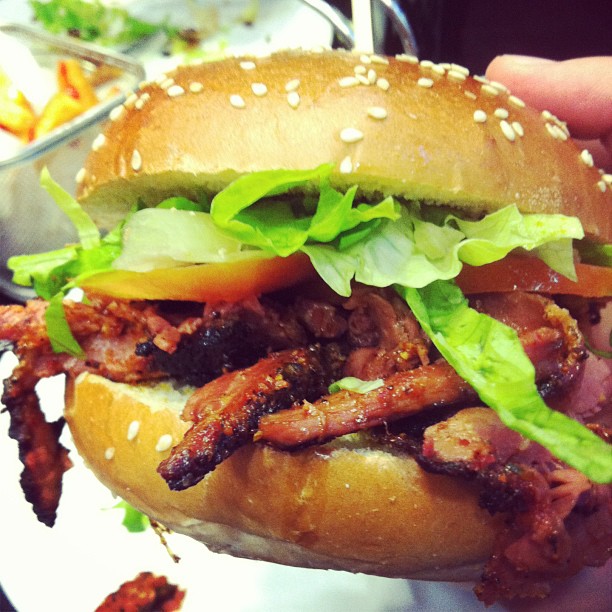 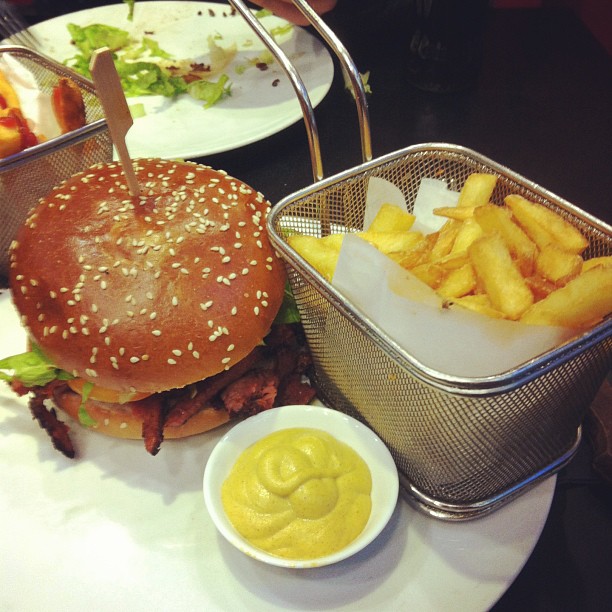 Most talked-about hummus in Jaffa (and Israel)

While hummus, like most foods is a subjective matter, one of the most debated, appreciated, talked-about and recommended places for hummus is Abu-Hasan.
While other dishes tend to be easier to classify, hummus, being basically a mushy paste with toppings is a tad harder to pinpoint. Thus, there are several go-to hummus masters, venues and genres used to ease the definition of what you are eating.
Abu-Hassan is one of them, if not the main one.

This specific location is so popular that the owners opened another branch right across the street and they are both packed at all opening hours (although they start early).
They close the doors as soon as the hummus ends (rather than making new batches) which usually occurs in the early afternoon; you'll be lucky to visit around 15:00 and find any food left.

While hummus enthusiasts might pick other (obscure) places as their all time favorites, this hummus is a touchstone frequently name-dropped in every hummus discussion.
It's also hailed by most as the best hummus ever, the best msabbaha ever, and other titles of grandeur.

I had the pleasure of eating an early morning plate of hummus with fava beans, whole chickpeas and msabbaha (hot hummus mixed with tahini) just several day ago.
The food arrived to our table within a minute, and was delicious to say the least.

The food is great, they always deliver, within moments of your order and the prices are on the lower side of the hummus pricing scale.
There's aren't many options - this is a place you go to for hummus, with an addition of falafel and fries, but that's it. They're good at what they do and there's no need for new ventures.

The place is a must whether you're a tourist or just looking to grab a plate of good hummus.
It might not be your personal best as hummus styles vary, but you owe it yourself to try them at least once, and if you do ask for the triple dish (as seen in the picture) - to get a taste of several styles of hummus.

Bottom line:
Location: clean, well lit, nicely designed, but quite loud - there's plenty of shouting from the staff, it's a thing
Staff: courteous and helpful, great and fast service
Pricing: relatively low
Food: some say it's the best hummus in the universe
Verdict: worth coming back to, again and again

While going out for a much needed work brunch yesterday, a friend suggested we try the food at a nearby QuickCafé branch.
Surprised by the fact they offer actual food (a variety of noodles, rice based dishes, poultry, pasta and fish) and not just the sandwiches and pastry displayed on the counter, I decided a grilled cheese sandwich with tomatoes would suffice, especially since there was an additional salad.

The food was delicious, and there was an additional mini-dipping-bowl of mustard based vinaigrette that suited both the salad and the sandwich. I also asked for some tahini and they brought it in a shot glass which I found kinda funny.

The priced seemed a bit high at first, but when I got the plate I realized that it wasn't your ordinary panini.
All and all - a positive experience.

Although named Falafel Baribua (which means square falafel), the venue (part of a chain) also offers quite the mean hummus - and a vegan take on shawarma (doner).

On this occasion I had a wonderful plate of hummus, with fava beans, chickpeas, tahini, parsley, olive oil and a garnish of paprika.
Complementary falafel and pickles were also provided.

While the price was rather costly for a plate of hummus - there were the added side dishes (albeit some places add them for free).
The service is great - but it tends to get confused if you choose to sit at the outside tables.

The place is clean and well designed, with a good lighting which really ads to the mood.
The service is really friendly, and the place itself is also vegan friendly which makes the experience even more positive.
Overall - the food is delicious and there's a vast menu considering this is a falafel based location.
Posted by Sabib at 2:33 AM 2 comments:

Bahadunas is a well known and rather popular hummus franchise, with most branches operating around the times people go to lunch and located near office populated areas.

They specialize in hummus and ful (fava \ broad beans), and are known for adding unorthodox toppings onto your hummus plate - they almost insist adding chopped onions (which horrify me) and propose salads and pickles as well. The pickles are actually a good option.

In the image above is a plate of hummus, with ful, chickpeas, tahini, chopped parsley, olive oil, spicy coriander (cilantro) paste and obviously pickled cucumbers.
It was rather great, although it took more than a while to get my plate due to poor service skills.

The place is clean, well designed, not too costly and the slow service comes with a friendly smile.

Ruben | The power of corned beef

I won't go on and on about Ruben, not since they don't deserve - because they really do; except I wrote about them before, so I'll just paste links to previous posts.

The picture below is from last week; I was drinking out with friends and when we got the munchies we realized Ruben was around the corner.

The sandwich was amazing as always, so was the service.
Look at that pinkish, juicy meat.
LOOK AT IT.

Last Thursday I visited the city of Haifa, to attend a show by local band Ke$$ef, opening for the Italian trio Psychofagist.
After the sound-check we got quite hungry so we went about town, searching for a place to dine.
Since time was scarce, we stopped at the first open venue - a pizzeria called Fresco.

Most of the other diners were vegetarian, however I really wanted the taste of death on my tongue so I ordered a pizza all for myself.
A pizza named "sausage pizza" caught my eye, bacon, ham and pepperoni seemed like a great idea for toppings so the choice wasn't difficult for me.

The pizza was quite greasy - but in an amazing pork-fat and bacon-juice way. This actually made up for the lacking tomato \ pizza sauce which I like so much, but as I said, it was juicy and delicious enough for me to not care.

The pizza itself was quite basic, simplistic even, by far not the most impressive I've had but still, somehow it was pretty good - must have been the hunger.

A Visit to Hummus Abu Adham

Abu Adam is probably at the top of my all time favorite hummus list.
The amazing hummus, hearty service, low reasonable pricing and infinite refills are a what hummus enthusiasts' dreams are made of.

This is just one in a series of frequent visits - hopefully I'll soon gather a post reviewing all of them combined.

There's no way do textually describe just how good this hummus is, so all you can really do is stare at this picture and envy me.
Seriously, it's really good.

If you happen to be in the area - don't miss it!

Quick update:
Since the previous BLT from Dixie was so good -  I ordered another one, it turned out to be even better!
That is all.

2am sandwich at Moses, Tel-Aviv: slightly roasted bun, arugula mayo, lettuce, tomato, grilled portobello mushrooms and a side of bacon. Also at hand - a plate of fries with BBQ and chili sauce.

Although this sandwich was supposed to be a vegetarian take on BLT (Moses call it PLT on their menu) I could not resist my urges - thus the bacon.
In light of my previous disappointments with this location and the chain in general (great dishes replaced with mediocre ones and prices being jacked) this sandwich was amazing, affordable and quite a nice companion to their late night discount on booze.

The service war horrible, but the food was great and the ambiance was generally pleasant.
The so called PLT is very much worth returning for.
Posted by Sabib at 5:35 AM No comments: